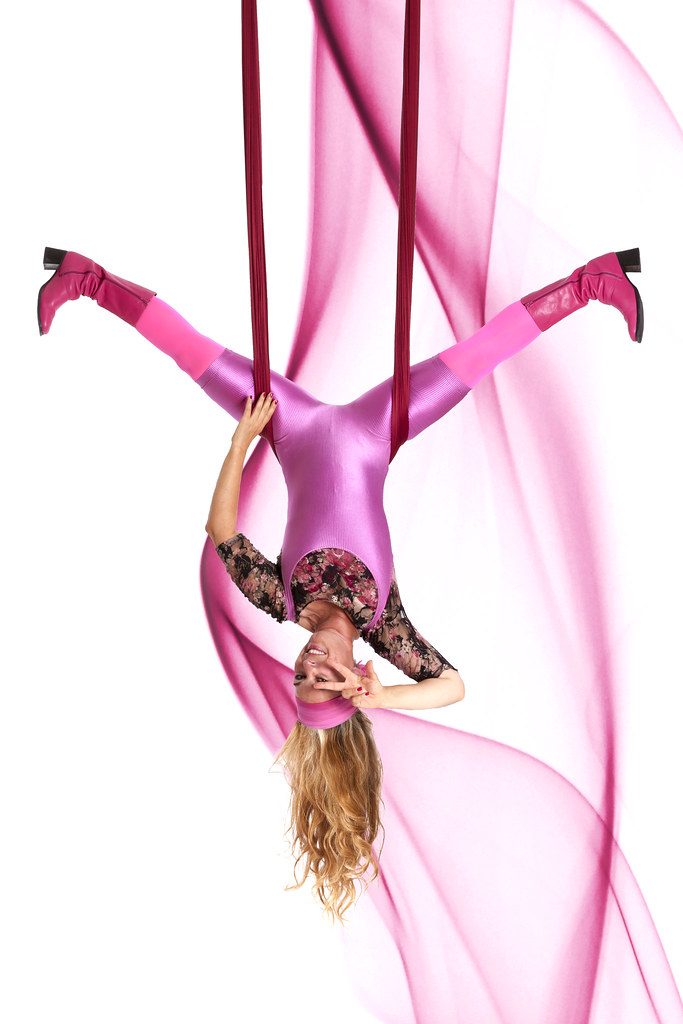 We are having so much fun discovering Aerial Yoga

Both myself and me youngest daughter are on our new yoga sling daily.

We replaced her old swing seat from its frame and attached our new silk to it.

Aerial yoga combines acrobatic arts and anti-gravity asana, but it’s also an accessible practice that can help you find more length in your spine and safe alignment in your poses.

Aerial yoga combines acrobatic arts and anti-gravity asana, but it’s also a practice that can help you find more length in your spine and safe alignment in your poses.

Flying yoga—forms in which you’re suspended off the ground Cirque du Soleil–style—may have seemed faddish at first, but it’s still gaining momentum. That’s in part because of its surprising physical benefits, including spinal decompression, pain relief, and ease in inversions and other challenging poses, and also because it’s a potent teaching tool for finding better alignment in most any asana.

Aerial-yoga practices started more than a decade ago, as teachers began combining traditional yoga with aerial acrobatics in the occasional class. Today, there are several distinct schools, and classes appear regularly on studio schedules and at yoga festivals around the world. The aerial-yoga family now includes in-gym or studio practices that go by the names of Air Yoga, AntiGravity Aerial Yoga, and Unnata Aerial Yoga, as well as portable systems from companies OmGym and Gorilla Gym that are popular at yoga festivals and conferences, and that are sold for personal use at home.

Though these brands and styles may vary, they all share the use of a suspension system with therapeutic value: An aerial yoga “silk,” or hammock—suspended from the ceiling or a metal frame—that can support your weight, ease pressure, create space in your joints, decrease compression in your spine, and help you find more mobility. Hanging upside down may seem risky, but you can invert in the hammock without putting pressure on your head or spine as you would in classic inversions.

The hammock can also be used to strengthen muscles and find correct alignment in most poses, not just tricky inversions. Research on suspension training indicates that you have to use your core muscles more when you’re suspended than when you’re on the ground to keep yourself stable plus arm strength you gain by hoisting yourself into and around the silk. Because you have to pull down on the hammock to lift yourself up, you build a kind of core and upper-arm strength that they don’t build in traditional yoga,

Aerial silks can also provide natural alignment adjustments. For example, if you were to do a suspended variation of Uttanasana (Standing Forward Bend) or Adho Mukha Svanasana (Downward-Facing Dog Pose), with the hammock at your hip crease, the placement of the sling helps glide the heads of the thighbones back—which is how they should move when you fold forward at the hips, but is hard for some people to achieve on the floor, says Miller. For these practitioners, “the sling could help relieve pinching at the front of the hip joints in forward bends,” he adds.

Using the silks is especially useful to beginners, says Dortignac, who has trained more than 200 Unnata teachers in the last nine years. “When a new student drapes over the hammock, in Down Dog, for example, gravity does the work for them,” she says. “The hammock helps with lengthening and creating internal space. Once we give students that feeling in the hammock, they’ll have the memory of what that was like, and take it with them to their floor practice.”

Or maybe you’re struggling in Eka Pada Rajakapotasana (One-Legged King Pigeon Pose). In an inverted King Pigeon in the hammock, you can explore important actions of the pose, such as lengthening the spine and the hip flexors of the extended leg, while avoiding pressure on the front knee, which can make the regular pose problematic for some people, says Miller. The sling also helps with the backbend in this pose, while decompressing the spine. “In the normal version of the pose, you have to work against gravity to lengthen the spine,” adds Miller.

For all of its therapeutic and alignment value, an aerial practice is also fun. “The word ‘antigravity’ can also mean ‘against graveness,’” says Anti Gravity Aerial Yoga creator Christopher Harrison. “So we practice ananda (or extreme happiness or bliss) while inverted, using laughing breaths, or forcefully exhaling with a laugh.” People are also naturally curious about what it might feel like to fly or be suspended, adds Dortignac. “Aerial yoga is a chance to dream and to play, to try something different and put yourself in a position you never thought you could be in.