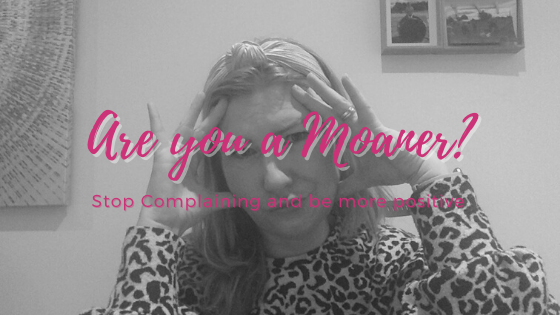 Moaning is a waste of your valuable energy and productiveness and can be hell for those around you!

Instead of being truly grateful for being well enough to do home schooling and having a healthy child to teach at home during the lockdown and having a tumble dryer I just MOANED!

I was feeling fed up of being so negative and so decided to revisit and share this inspiring information from Will Bowen.

The 5 Reasons People moan or – Complain

True complaining, that is, moaning or whining to someone who cannot improve the situation
you’re complaining about, is always done to get one of five social needs met.
Behind the complaint is a human connection that the complainer perceives to be
missing such as getting attention, forgiveness for not doing well at something, or a lack
of approval.
When you understand the real reason behind your and other people’s complaints,
you’ll find a way to get social needs met without the toxicity of complaining.

Connecting to other people is a
basic human need.
A person may complain to a
coworker, friend, family
member or even a stranger in
an elevator about the weather,
local sports or anything as a
means of simply starting a
conversation.
Examples:
“Is it hot enough for you? That’s four
darn days in a row when the
temperature’s been over 95!”
[TRANSLATION: Hello, Please talk to
me!]
“The traffic was lousy this morning.”
[TRANSLATION: Now, please
complain to me about your
commute so we’ll have something to
talk about.]
Silence the Complaints: When someone complains to Get attention, ask,
“What’s going well with (whatever they’re complaining about)”?
For example, if they’re griping about their job, keep asking, “What’s
going well with your job?” Or, “What do you like about where you
work?”

When given a task, people
complain about the conditions
surrounding the task as a way of
getting off the hook.
Their intention is to either get
you to admit that the task is
impossible, or, to prepare you for
the fact that they are not going to
do good job.
It’s excuse-making in advance of
even attempting to do
something.
Examples:
“I don’t think I can fit that into my
calendar. I’m so busy with all this
extra work the boss keeps dumping
on me. I’m overwhelmed as it is. It’s
not fair.”
[TRANSLATION: I’m not going to do
what you’re asking. And, I’m using
my boss as an excuse.]
“Mom, Ashley just texted me. She
says that our teacher, Mr. Jones,
said the project has to be on yellow
poster board and not blue! Mr.
Jones is always changing his mind
and he’s never clear. It’s not my
fault—it’s his!”
[TRANSLATION: Mom, I wasn’t
paying attention when the teacher
gave out instructions. Don’t expect
me to receive a good grade on this
school project.]
Silence the Complaints: When someone complains to Remove
Responsibility they are building a case to proved that what is being asked of
them is impossible.
They are complaining to be let off the hook.
With every complaint about the assigned task, keep asking,
“If it were possible, how might you do it?”

We complain about people who
are not like us as a way of
making ourselves seem superior by comparison.
And, we complain about things
and events as a way of
impressing people with our high
standards.
Examples:
“Yeah, Cheryl’s team did a good job
on the project—well, more of an
okay job—actually. They were two
weeks behind on delivery and I can’t
believe they let that computer virus
slip through!”
[TRANSLATION: My team would have
done things on time and better.
Why? Because I’m a better
manager than Cheryl.]
“You thought that was a good
movie? You’ve got to be kidding.
The acting was stiff, the story was
weak and the music did nothing to
move the plot along.”
[TRANSLATION: I know a lot about
movies. You should admire me and
let me tell you more.]
Silence the Complaints: Someone complaining to Inspire Envy is
actually wanting to be complimented and reassured. Therefore,
Compliment them for the opposite of whatever they’re
complaining about
In the two examples, above, you might say, “You’re a great leader and your
team produces what they promise on time, every time.”
And, “You seem to know a lot about movies, what’s the coolest trend you’ve
seen in films recently?”

There is strength in numbers.
People complain to build
alliances with others who agree
with them to increase their
power.
Others will complain to get you
on their side.
Their complaints will seem
legitimate but, if you look deeply,
you’ll see it’s a ploy to gain power
and you’re just another pawn
they are trying to get on their
side..
Examples:
“Jim is a good guy but he’s not
supervisor material. Half the time
he’s late and I really don’t think he’s
that smart. ”
[TRANSLATION: I want that
supervisor job! So, help me spread
negativity about Jim because he’s
my competition.]
“Dad! Scott and Megan are playing
and they won’t let me play. And,
they’re using your hammer and you
told us not to play with your tools”
[TRANSLATION: Dad, I feel left out.
You’re bigger than all of us. Please
make my brother and sister play
with me.]
Silence the Complaints: There is an old saying, “When two gorillas are
fighting in the jungle, stay out of the jungle.”
When someone complains to get you on their side and gain power over
someone else, refuse to get involved.
Put the problem right back in their hands.
Keep telling the complainer,
“It sounds like you and he (or she) have a lot to talk about.”
You might even offer to set up a meeting between the two of them. This will
clearly show them that you choose not to get involved with their
complaining power struggle.

Excuse Poor Performance is the
past tense version of Remove
Responsibility ( the R in
G.R.I.P.E).
Both are about being let off the
hook.
When someone complains to
Remove Responsibility, they are
telling you why they are either
not going to do something you
ask, or, they are going to fail —
and it’s not their fault.
When someone complains to
Excuse Poor Performance, they
have already failed and are
complaining to justify what
happened—and, as before, it’s
not their fault.
Examples:
“I know I said I’d bring home salad
stuff but I got caught up at work in
some of Jim’s last minute nonsense
and it just made me forget.”
[TRANSLATION: I’m blaming my
forgetfulness on something totally
unrelated but if you buy it, I’m off
the hook.]
“I tried to get the report in on time
but I didn’t get the numbers from
the accounting department soon
enough.”
[TRANSLATION: I actually waited
until the last minute to ask the
people in accounting for what I
need. But, technically, they didn’t
get it to me so it’s their fault not
mine.]
Silence the Complaints: A person complaining to Excuse their poor
performance has already messed up or not done something you’ve asked.
If you start asking, Well, why didn’t you think of this? or, Why didn’t you
plan for that?” he or she is just going to defend their poor performance with
more complaints.
Instead, ask,
“How do you plan to improve next time?”
This removes their defenses and opens them up to making plans to do better in the future.

So what do you moan about and what GRIPE does it come under?

You can purchase the Will Bowen book HERE.